“Energy security is an issue that impacts every other critical issue. … America is stronger and more secure when we control our own energy destiny, and offshore resources are a critical part of that.”

There’s not a more compelling reason than the way offshore development can create hope and opportunity for people who historically have struggled to gain access to both – a point made by Stephen Gilchrist, Explore Offshore state chairman for South Carolina. 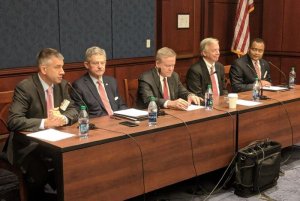 Growing U.S. energy self-sufficiency can change the economic condition of historically disenfranchised communities across the country, Gilchrist said. He spoke of South Carolina’s “corridor of shame’ along Interstate 95, so named for its lack of economic development. Forty percent of the area’s residents are African American and minorities, he said, and offshore development could change lives:

“We see this as an opportunity to revitalize the entire coastal region … along that I-95 corridor that has been designated a ‘corridor of shame.’ It is our hope that as we continue to explore efforts like offshore that we can change that from a corridor of shame to a corridor of opportunities to allow folks to have jobs and economic development.”

It’s an important point. Often the offshore discussion may center only on the concerns of residents living along the coast, which misses the great economic opportunity for people all over a state that can be provided by safe offshore energy development. Gilchrist said minority students from economically underdeveloped areas are looking to STEM education (science, technology, engineering and mathematics) to elevate themselves, only to find job opportunities are limited. Offshore energy development could help change that, offering well-paying jobs – many of them involved in the technological advances that are being driven by natural gas and oil.

Certainly, that’s a message Explore Offshore – a coalition of small businesses, local associations and veterans groups in Florida, North and South Carolina, Georgia and Virginia – is spreading around. Informing Americans about safety and technological advances in offshore development is integral to policy choices that will support harnessing America’s offshore potential. As Nicholson and fellow national Co-Chair Jim Webb write in a new op-ed for Real Clear Energy:

“For our national security, for our economic security, and for thousands of American jobs, we should move forward, and we should do so soon. It takes about ten years to research, gain approvals, and deliver to market the offshore oil and natural gas products that will service America’s energy needs. We should not wait until an emergency several years down the road forces us to act in a crisis mode.”

The offshore discussion has never been more timely, because the administration is expected to release the next five-year federal offshore leasing program soon. Webb at the Capitol Hill event:

“I don’t think the American public has been hearing the full story of what offshore oil production could do for our national security and our economy and also the protections in place [to preserve the environment].”

“Some public perceptions on offshore development are based on “information that has been surpassed by technology, and you need to bring people into the future on this. If you look around the world, offshore is a growing industry. … [We need to] talk to people, get a discussion.”